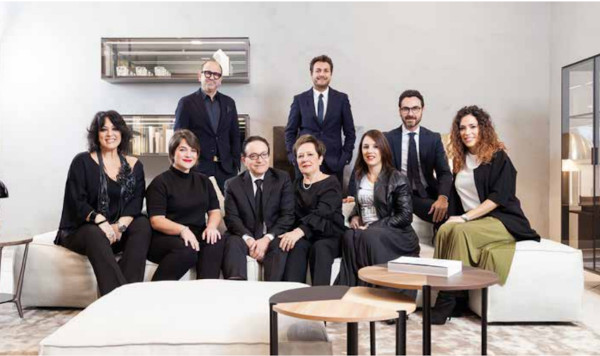 Everything_ was born_ from the enterprising Filadelfo, originally a barber from a very small town adjacent to Zafferana Etnea who after a small opportunity decides to invest in the first shop in the town center, where he resells products such as Elementi Bar, Gramophones and the first radios. He took care of everything, Filadelfo, even arranging the antennas on the roofs, with the advent of the first televisions (1955), in fact the whole town loved to gather in the homes of the still unfortunate. From the early 1960s he entered homes with other products, he began selling the first washing machines and sewing machines. The kitchens and bedrooms arrived in Di Mauro's workshop around 1963: the furniture arrived by train at Guardia Mangano station and with a truck, his father Filadelfo, helped by his children, went to retrieve them.

In 1967 Filadelfo passed away and his son Santo took over the reins of the company together with his mother Venera. A very young saint, who inherited from his father the art of getting by, of sacrificing himself and of looking to the future, carries on his work project, in a thriving town like Zafferana, small but well supplied. At 19 he already had a well-defined vision of everything and in 1973 at the age of 25 he began to invest and increase the business, buying a shop in the suburbs, much larger. Here he starts selling gifts, TVs and furniture. During the 1980s, the years of prosperity and the constant increase in trade, Santo was able to give substance to the project started by his father, thanks to his constant and tenacious work. He then buys an important exhibition space for furniture and a room intended entirely for the warehouse for resale.

Thus he began the business of exclusive furniture.

In the 90s the modern entered the homes of families, and also in the Di Mauro company. Here, in fact, her daughters arrive: the first of her is Vera, her eldest, who after a hard fight (she wanted to go to the conservatory) started almost for fun to help her father. The veranda has remained only a beautiful passion replaced by an innate talent in furnishing, design and above all in the typical good taste of her person. The second daughter, Irene, enrolled in the first year of law, with the great ambition of justice, after realizing that justice was not so alone, leaves her studies and approaches the family business, realizes that her elegant character (or hereditary talent) cannot ignore good taste and the wonderful art of furnishing and designing spaces, so towards the end of the 90s he decides to put his solar dedication into this beautiful work. The early 2000s welcomed Valentina, the third of four sisters, into her staff, who instead with great firmness threw herself headlong into work from the very young age of 18, demonstrating her pragmatic personality as a workaholic. Alongside his three daughters, strong and happy, Santo, facing the crisis that was about to emerge, invests in a new exhibition space, creating the first kitchen center and increasing the exhibition offer, confident of an almost envious family solidity. The company acquires important brands such as Flou and Lago, and looks higher and higher, keeping its feet firmly on everyone's needs.

But an important story, to be such as well as look to the future, must always look to its origins, must have wings and must keep its roots. In 2014, furnishings and design go hand in hand with the sale of gift items and household items, objects and gadgets, as at the beginning of this adventure. And this new activity sees the arrival of the fourth and last daughter, Giorgia, who with great passion, despite her generous age, embarks on this path alongside the now capable Di Mauro family. Behind the scenes is Rita, a caring, present, affable mother and wife who, with a thousand ups and downs, takes care of the personal needs of a large family engaged in an ever-growing work activity.

Arredi DI Mauro becomes a srl, the father Santo leaves room for the very valid daughters and skilled collaborators who entered the company over time.

For several years, Arredi Di Mauro has been a leader in the furniture sector, always suggesting new housing solutions with his proposals. The large exhibition of over 2000 square meters, covering the various styles (classic and modern), allows customers to meet their furnishing needs. Di Mauro staff, always attentive to market changes, offers personalized consultancy, thanks to the consolidated experience in the sector, using highly sophisticated and innovative graphic techniques.

... "The continuous search for the" new "has always been for us an element of competitive advantage and a constant work objective" ...

Looking to the future